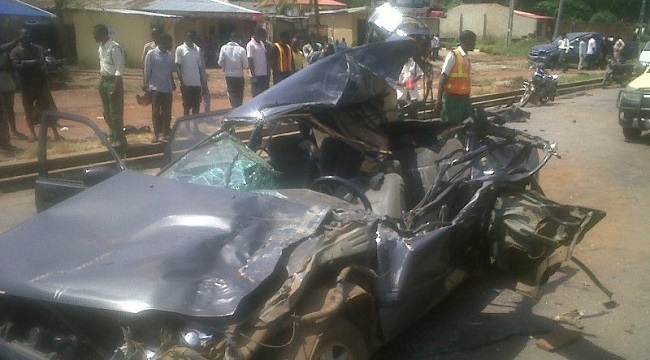 Four persons reportedly died in an auto crash involving a motorcycle and a commercial car along Oru-Ijebu Igbo Road on Tuesday.

The car, with six passengers in it was said to be traveling inward Ijebu Igbo when its brakes failed and ran into the motorcycle.

The Public Relations Officer of the Ogun State Traffic Compliance and Enforcement Corps, Babatunde Akinbiyi, said the car hit the motorcycle which was coming from the opposite direction and killed the rider and the passenger.

He further explained that two of the six passengers in the car also died.

He said, “From the report, I got from our operatives who went to the scene of the accident, the rider of the Bajaj motorcycle and the passenger were hit by the car, and they died.

“Besides, two other passengers died among the six passengers in the car, while four others sustained injuries.

“The driver of the car was speeding, and the car suffered brakes’ failure, so he could no longer control it.

“Three of the victims, two females and a male, died while being rushed to the Olabisi Onabanjo University Teaching Hospital, Sagamu, for treatment, while the other one, a male, died at the General Hospital, Ijebu Igbo.”