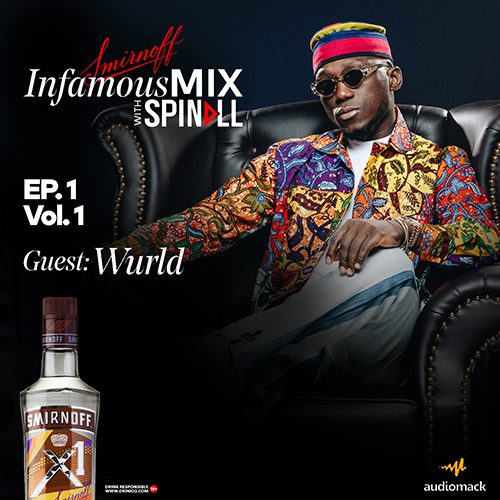 It’s the debut edition of the much anticipated Smirnoff Infamous Mix show and DJ Spinall gets the honour of being the host. Although Spinall confesses to being a first-time host, the show promises to be fun-filled, entertaining, and informative.

On the first edition of the show, the ace DJ’s first guest is the one and only “Electronic Dance Music” guru, Wurld, and of course, they have a range of Smirnoff drinks to chill with. Before his guest comes on board, he serenaded his audience with a video of his 2020 hit song with YBNL’s Fireboy “Sere”.

Wurld seems elated to be on Smirnoff InfamousMix, coupled with the fact he is the first guest to ever grace the show. Reminiscing on the first time they crossed paths back in Los Angeles, Spinall admits to listening to Wurld’s first song “Show You Off” for the very first time and it’s a song he feels like the world should listen to over and over, as it encompasses a whole lot of emotions.

Wurld went on to answer the question of his experience while creating the song and described it as one which was exciting. It was a song that served as his introduction back to Nigeria. Before then, he was doing hooks for artists back in Atlanta, the likes of Bob, and DJs in Europe. In all, it was such a crazy experience for him.

He gave a big shout-out to DJ E cool for being the first DJ to air his song “Show you off” in a club in Europe, as well as an ace music producer, Shizzi.

Having left Nigeria back in the year 2000, and releasing “Show You Off” in the year 2016, Wurld revealed that he felt connected back to his roots for the first time in a very long time.