LET’S TALK!! Between Nnamdi Kanu & Ojukwu, Who Really Has The Best Interest Of Biafra & Ndi Igbo At Heart?

Earlier today, a Facebook friend made a post about the uncalculated actions of the IPOB supreme leader Mazi Nnamdi Kanu. How his actions exposes the Igbos to more danger.

“If your actions exposes the people you claim you want to protect to more death, danger, and fear, then perhaps it is time to reevaluate your intention. Actions of Nnamdi Kanu have not made the Igbo people safer in any way”.

Unfortunately, I agreed to his views. Truely, the actions of Nnamdi Kanu have not made the Igbo people safer in any way.

Let’s take a look at the life of Biafra Republic founder, Odumegwu-Ojukwu.

Chukwuemeka “Emeka” Odumegwu-Ojukwu was a Nigerian military officer, statesman and politician who served as the military governor of the Eastern Region of Nigeria in 1966 and the leader of the breakaway Republic of Biafra from 1967 to 1970. He was active as a politician from 1983 to 2011, when he died aged 78.

I don’t want to go into details on this very publication, so I’ll try make it brief.

In January 1967, the Nigerian military leadership went to Aburi, Ghana, for a peace conference hosted by General Joseph Ankrah. The implementation of the agreements reached Aburi fell apart upon the leaderships return to Nigeria and on 30 May 1967, as a result of this, Colonel Odumegwu-Ojukwu declared Eastern Nigeria a sovereign state to be known as Biafra.

On 6 July 1967, Gowon declared war and attacked Biafra. After two and a half years of fighting and starvation, a hole appeared in the Biafran front lines and this was exploited by the Nigerian military. As it became obvious that the war was lost, Ojukwu was convinced to leave the country to avoid assassination. On 9 January 1970, he handed over power to his second in command, Chief of General Staff Major-General Philip Effiong, and left for Ivory Coast, where President Félix Houphouët-Boigny, who had recognised Biafra on 14 May 1968 granted him political asylum.

In 1981, Ojukwu began campaigning to return to Nigeria. Nigerian president Shehu Aliyu Usman Shagari granted a pardon to Ojukwu on 18 May 1982, allowing him to return to Nigeria as a private citizen. Ojukwu re-entered Nigeria from Ivory Coast on 18 June.

Ojukwu declared his candidacy for the Nigerian Senate in 1983. The official tally showed him losing by 12,000 votes, though a court attempted to reverse the ruling in September of that year, citing fraud in the election results. However, the disputed result was rendered moot when the Shagari government fell in the 1983 Nigerian coup d’état on 31 December.

In early 1984 the Buhari regime jailed hundreds of political figures, including Ojukwu. who was held at the Kirikiri Maximum Security Prison. He was released later that year.

If you noticed, Ojukwu did not run away because he was afraid of anybody. He he was convinced to leave. Years later, he started campaigning to return to his father’s land. Luckily, his campaign worked out and he returned back home. He didn’t stop pushing; he contested for Senate but failed, got jailed by Buhari, contested for president several times.

Nnamdi Okwu Kanu is a Nigerian Biafra political activist. He is the leader of the Indigenous People of Biafra. The main aim of IPOB is to create an independent state for the people of old Eastern Region of Nigeria through an independent referendum.

Going straight to his arrest and encounter with the Nigerian government. 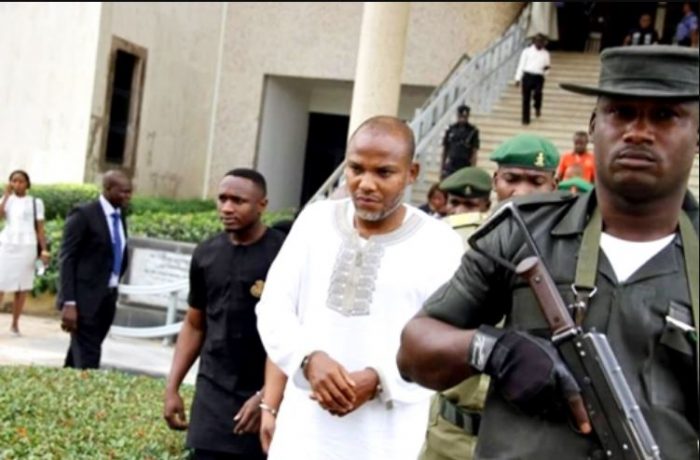 On 18 October 2015, it was reported that Kanu had been arrested in Lagos State by Nigeria’s secret police, the Department of State Services (DSS). Kanu had told his solicitors that on 14 October 2015, he was arrested by the agents of the Federal Government of Nigeria, the State Security Service (SSS), in his hotel room at the Golden Tulip Essential Hotel Ikeja, Lagos State.

On 20 October 2015, Vanguard announced that Kanu had been released on bail. However, media sources supporting the objectives of IPOB called the bail “controversial” and claimed the DSS announced the bail only “to calm the angry people of Biafra”. But Nnamdi Kanu was truely released on bail by Justice Binta Nyako for health reasons.

He disappeared from public view after his home was raided by the Nigerian military, in September of 2017, an event which led to the deaths of 28 IPOB members. Not being seen in public for over a year, there was wide-ranging speculation regarding his whereabouts, with members of the IPOB accusing the Buhari government of having abducted him. However, in October of 2018, unattributed photographs and videos, apparently placing him in Israel, were widely circulated on social media.

Kanu is currently in only God knows where, giving commands and directives. He doesn’t want to come back to Nigeria like Ojukwu did. He refuses to contest for any political post like Ojukwu did. His choice and I have nothing against it.

During the Biafran war in 1967, approximately 5 million igbos were allegedly killed. But believe me, over 5 million igbo youths have been killed under Nnamdi Kanu for the past few years till this very moment.

All these boils down to my question.

Between Nnamdi Kanu & Ojukwu, Who Really Has The Best Interest Of Biafra & Ndi Igbo At Heart?

NEWS: Simi finally Opens Up on Why She Choose to Marry Adeleke Gold and Not Falz