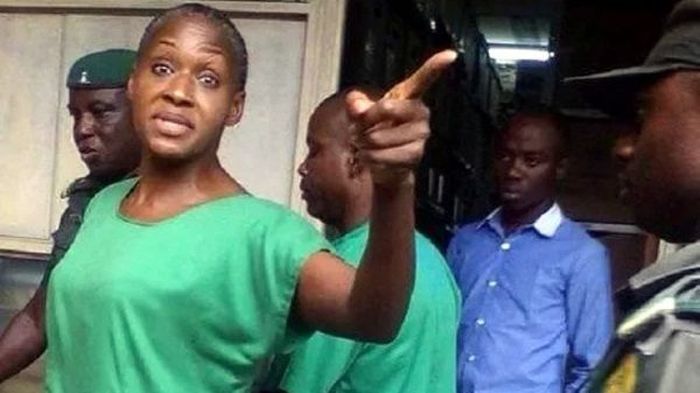 Controversial media personality Kemi Olunloyo, has opened up about her experience in prison.

Kemi, was in and out of prison three times last year for alleged cybercrime charges and defamation of character. The blogger accused Pastor David Ibiyeomie of Salvation Ministries of adultery.

Speaking with Saturday Beats, Kemi, opened up on her experience while behind bars.

I think the Port Harcourt prison is the biggest in Nigeria with 4,175 inmates – 75 women and 4,100 men – between the ages of 18 and 25. It is filled with young Nigerian men, but it is a disaster. The male inmates really worked for me and they gave me the nickname, Mummy K. I was really dealing with armed robbers without guns.

In prison, they are nobody; they look frail with various skin diseases. They are really suffering at the male section and they ought to decongest the place. The place is filled with very dangerous people and when I was taken to the prison the second time, I saw Jay Jay, the guy who shot policemen during the Zenith Bank robbery (in Imo State) last year.

I told him that the video went viral and that he was in serious trouble. He was the one that helped me carry my bag to the prison gate when I was leaving the first time I left the prison. At the prison, they mixed the ladies awaiting trial with those that had been convicted of their crimes. It is very rough in prison, but I was a gangster there.

The blogger continued speaking about the feeding situation in the prison.

People are dying of hunger in the prison; they gave us beans for breakfast, rice for lunch and garri for dinner. The beans meals were ‘half-cooked’ with sand, hair and other objects, so we had to wash our food, pick out the beans and cook it again.

The garri smelt of urine because it was processed very close to where the male inmates urinated. I was in Cell 1, which was for the big girls and high profile cases, while Cell 2 was for the village girls, cult members, kidnappers, sex workers, etc. Normally, we picked ladies from Cell 2 to be our helpers and they ran errands for us.

The name of my helper was Chidinma, I am happy she is also out of the prison and she would work for me later. I would mentor her and she would later work as my personal assistant. Chidinma – the mother of two – bought a stolen phone for a cheap price on the street, but unknown to her; it belonged to a cult member that was beheaded. The police traced the phone to her and she was charged with murder. Luckily I was able to help her and she is a free woman now.

On how she almost died while in jail, Kemi said;

The prison has an infirmary and also a pharmacy; it is NGOs that provide drugs for the pharmacy. I had a massive asthma attack during my stay, but the prison did not have drugs for asthmatic patients, it was one of the prison workers that provided N1,500 that they used to buy inhaler for me. If not, I would have died there. It was after I protested that they began to stock the pharmacy with asthma drugs. The prison workers are trying but the government needs to upgrade the prison.

On the huge medical bill she incurred upon getting out of prison;

I contracted eye infections because of the dirty water that we bathed with. A two-time fraudster convicted by the Economic and Financial Crimes Commission, Chioma, attacked me and put her finger in my eyes, simply because I warned her to stop disposing her chewing gum and other dirt under my bunk whenever she came to visit her friend who was in my room.

Since then, my eyes have not been the same. Also, when I visited the ENT (ear, nose and throat) specialists, they saw cotton wool stuck in my ears. My teeth were also damaged due to the food we were served. I have to undergo a root canal procedure. I slept on the floor for about a month because there was no bed space, the prison cells were crowded, so it was when someone was released that I got a bed space.