For the first time in Nigeria, EPL & La Liga Kings of football will engage in a football game alongside the best of the NPFL players. 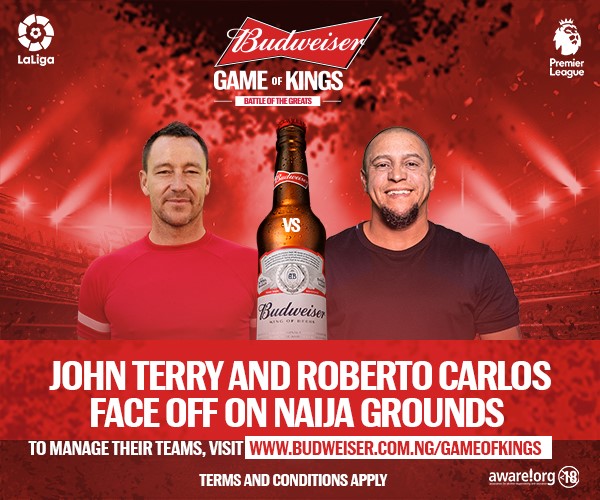 The announcement was made at a press conference held by the Budweiser Team at the Southern Sun Hotel in Ikoyi, Lagos recently.

Revealing the news at the forum to inform journalists, Marketing Director, International Breweries Plc, Tolulope Adedeji explained that the premium brand seeks to give millions of football lovers who double as beer lovers in Nigeria a unique experience that will stay with them for a long time.

According to her, “As a brand that has always supported football—one of the favorite pastimes of many Nigerians—Budweiser is offering a rare experience to thrill its teeming consumers. With the Budweiser Game of Kings Campaign, we are bringing two international football Kings, John Terry and Roberto Carlos who have a huge fan base here in Nigeria. And the idea is not just to have them over for a “meet and greet”. Rather, Nigerians will actually watch them play football live with some of our domestic league players.”

Explaining further, Adedeji noted that fans will get a chance to call the shots by assuming the coveted role of manager and assembling their individual teams when they visit www.budweiser.com.ng/gameofkings

“Consumers can participate by entering the unique code under the Budweiser crown cork on the website or texting the code to the USSD: 7827. Consumers stand a chance to be selected either as team managers or get VIP invites to watch the match live in Lagos, Nigeria.

If selected as team managers, they will be able to choose from a list of players in the different clubs on the Nigeria Professional Football League to form their first eleven team players who will feature as teammates to John Terry and Roberto Carlos during the live match. The selected managers will also be sponsored on an all-expense-paid trip to watch a live EPL match (terms & conditions apply),” Adedeji said.

In her response to questions from the press, Marketing Manager, Budweiser, Olajumoke Okikiolu explained the choice of former England and Chelsea center-back, John Terry, and ex-Brazil and Real Madrid left-back, Roberto Carlos as a function of their pedigree and roles as respected sports icons who played exemplary football during their active playing days, winning several trophies and accolades along the way and who continue to inspire a new generation of upcoming and aspiring footballers all over the world.

“We are delighted to be able to give football fans in Nigeria the pleasure of watching Kings like John Terry and Roberto Carlos play live on our home soil and we have no doubt it will be an experience they will cherish for a long time to come. It’s also our way of appreciating our consumers who have been loyal to the Budweiser brand over the years,” Okikiolu noted.

The Budweiser Game of Kings Campaign will run from October to November 2021 and is only open to individuals who are 18 years and over,

Budweiser is produced by International Breweries Plc, a proud member of AB InBev, the world’s largest brewer with over 400 beer brands globally.